The Greater Kansas City Shetland Sheepdog Club, Inc. (GKCSSC) was formed in April 1976, when a group of dedicated Sheltie breeders and enthusiasts in Kansas City joined together to create an organization devoted to the betterment of the Shetland Sheepdog.  Our first President was Marsha Jenia Wheatcroft of Marshland Shelties.  She and that handful of fanciers piloted a fledgling band of Sheltie lovers into a successful organization licensed by the American Kennel Club to hold specialty shows and various performance events in the metro Kansas City area. Their vision for the breed was single-minded: to breed, exhibit, and promote Shelties that conformed to the AKC Standard in every way, dogs that possessed the sound conformation and correct temperament and intelligence that had made the Sheltie one of the most popular and beloved breeds in the world.

1990
In 1990, in acknowledging the true working heritage of the Sheltie, there was enough interest in the Club to begin hosting annual herding trials which were some of the most successful and popular such events in the entire country, admired and attended by club members and local and long distance exhibitors alike. Unfortunately, we have lost our herding site so are unable to hold trials at the present time.

In 2005, our first tracking test was held, and our most recent addition has been the new performance event called Rally, which we offered for the first time at our 2006 specialty.
​
In 2006, GKCSSC members achieved success at the highest level in Obedience and Tracking with the first Obedience Trial Champion (OTCH) and the first Champion Tracker (CT) in Club history.

The Present
​
Our club members are active in almost every aspect of Sheltie ownership and competition, including many who take an active part in therapy work and in Sheltie rescue. In the competitive arenas, Club members' dogs excel in obedience, herding, conformation, tracking, agility, and rally. We are very proud of what our members have accomplished in such a variety of dog sport venues and of the positive image of the breed that their successes have helped convey.

We are just as proud and supportive of our members whose Sheltie's primary role is that of cherished family pets, those dogs who are willing playmates for their children, act as ever-vigilant guardians, and simply grace their yards and their couches.

The Greater Kansas City Shetland Sheepdog Club has come a long way from those early days more than 38 years ago, but we continue to strive toward the ideals and goals set forth by our early pioneering members and local and long-distance exhibitors alike. Unfortunately, we have lost our herding site so are unable to hold trials at the present time. 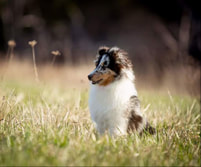